The Duomo Of Florence: Everything You Need To Know

No trip to Florence, Italy, is complete without a visit to the signature monument of the Renaissance city. The Duomo's majestic cream, green, and pink facade is topped off with the awe-inspiring cupola, which was once thought impossible to construct. The breathtaking piazza includes the city’s cathedral, a bell tower, baptistry, museum, and crypt. It all stands out in a city that’s full of wonderful attractions. Let us tell you about the great history and stories behind the Duomo.

Florence can be a challenging city to navigate. Get where you need to go stress-free - schedule a Prontopia local assistant to help you today!

Think it takes a long time for building projects to get completed in your town? At least you didn’t have to wait centuries. Work on the Florence Cathedral, called Santa Maria Del Fiore, was started in the 13th century by Arnofolo di Cambio. However, it wasn’t until the 19th century that it was completed.

The spot where it's located is steeped in even more history. Florence’s original cathedral, Santa Reparata, was here first. 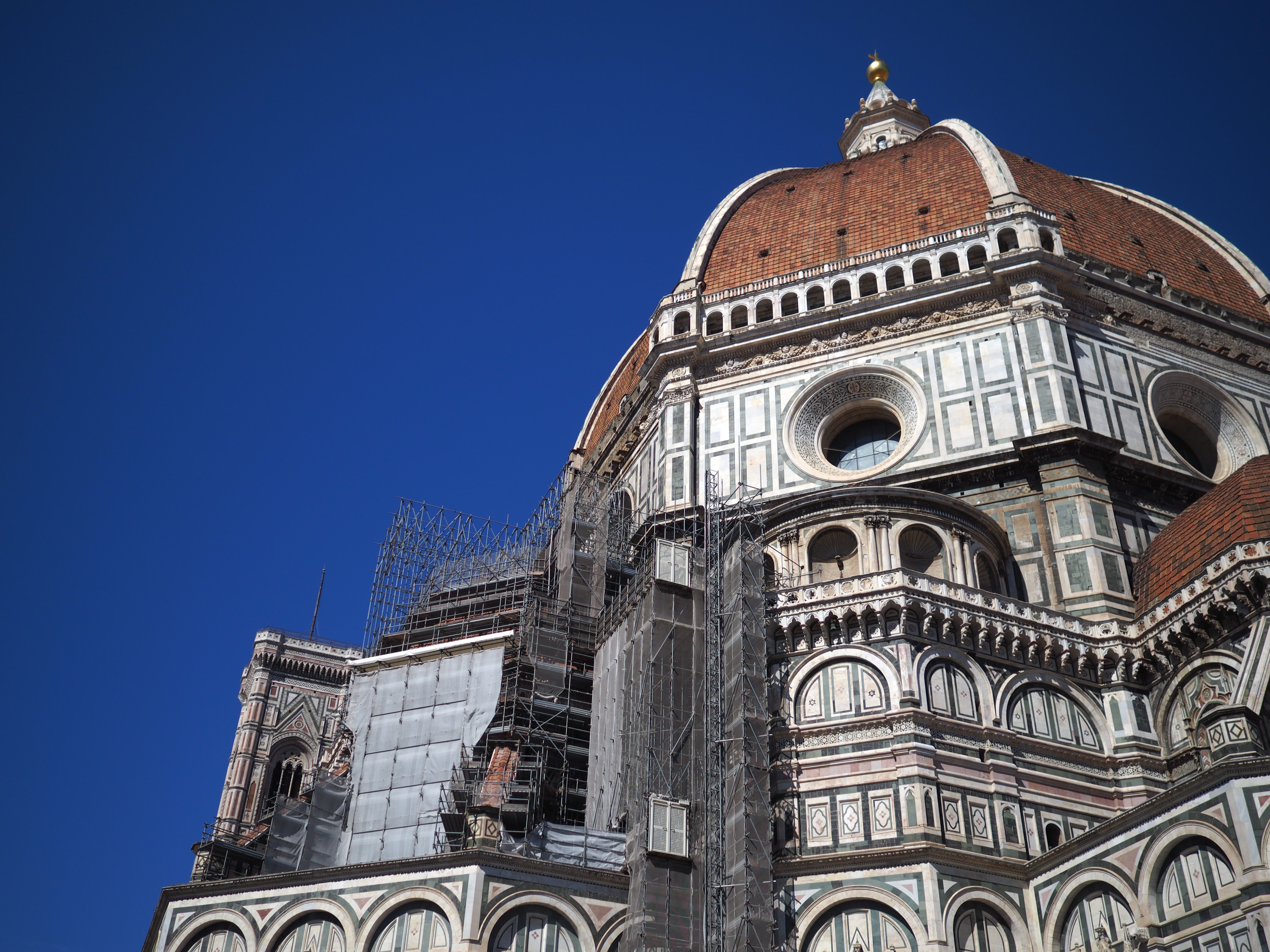 The 15th century brought a major development for the church, as it’s when another architect, Filippo Brunelleschi, added his famous dome. This is the cathedral’s most striking feature. Consecration happened after the dome was installed.

There was still one big item left unchecked for centuries: getting the facade completed. So much time had passed by then that they had to make sure they were staying as modern as possible with the design.

Today, the Florence Cathedral is a completed church and a complete wonder. To show appreciation for the people who helped it become what it is, there are statues of both Cambrio and Brunelleschi. You’d swear their presences could be felt all around this sacred space.

If you’re really pressed for time, you might just be able to see the Duomo’s exterior. That’s totally fine! You can still see Brunelleschi’s dome and the structure’s amazing multi-colored marble facade. But if you’re able to come inside, you won’t regret it.

Look down at your feet or gaze up at the sky inside the Duomo. Either way, you’ll be seeing something beautiful. On the floor are mosaic designs. These are stunning patterns that are practically hypnotizing in their intricacy.

Above, there are frescoes galore. The most major of these are Last Judgment, as envisioned by Giorgio Vasari. Other great ones here are by Domenico di Michelino, Paolo Uccello, and Andrea del Castagno.

Don’t try to make money an excuse for not visiting this cathedral. Admission is free, which definitely helps to draw in the large crowds. If you want to go to the top of the dome and see some other parts of Piazza del Duomo, you’ll have to pay up and climb the 463 stairs to do so. But the spectacular panaroma that awaits you at the top is worth the workout.

Read next: Best Places To Visit In Florence For Free

The Bell Tower is another great part of the Duomo. Known as Giotto's Bell Tower, it is a remarkable 84.7 meters tall. Though named for architect and painter Giotto, he died before it was completed. Others, like Andrea Pisano, Alberto Arnaldi, and Francesco Talenti, helped Giotto achieve his dream, posthumously. It was Talenti’s finishing touches of the massive windows on the tower that marked its completion in 1359. 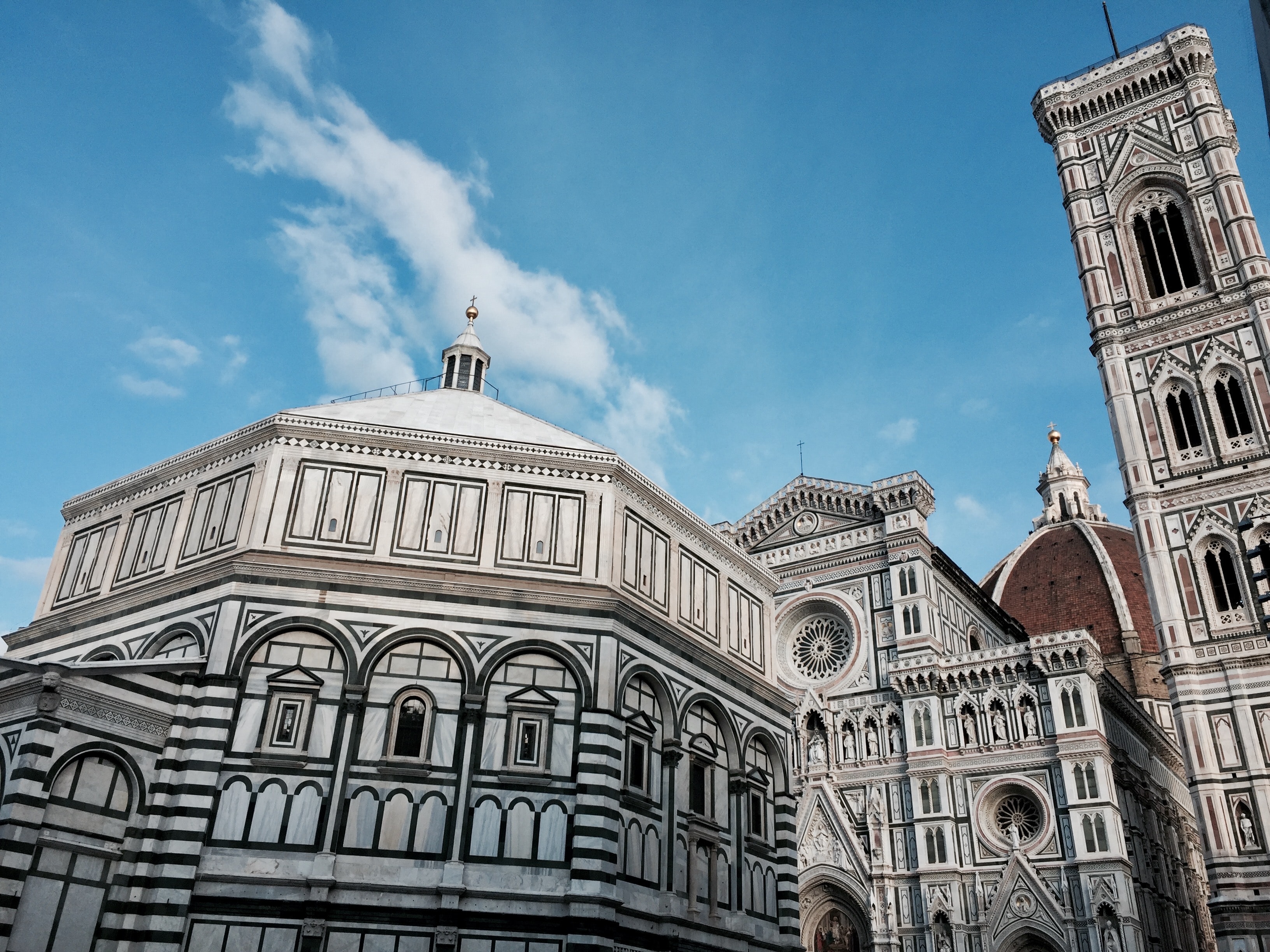 The Florence Baptistery - or - the Baptistry of St. John, is a minor basilica but not a minor part of the city’s religious focus. Its origins go back centuries before the Cathedral and Bell Tower, if you want to get a better idea of how historic Florence really is. Many later architects, including ones who worked on the Cathedral, took cues from the Baptistery for its influence on Florence designs. This structure has long been revered, especially for its doors. Michelangelo called these bronze doors "Gates of Paradise” and who are we to question his judgement?

Read next: How To Spend One Day In Florence

The Opera del Duomo Museum is one of the best museums in all of Florence. Its building was first made to help keep the construction of the Bell Tower and Cathedral in check. Since then, it’s been about preservation, not just of these buildings but also of great artworks. It has been an art museum since the 1890s. The pieces here are ones that were previously in the Bell Tower and Cathedral. You can see works by Michelangelo, Donatello, and della Robbia, among others.

The most-recently-known part of the Duomo wasn’t discovered until the latter half of last century. During an excavation, lasting from 1965 until 1973, archaeologists found what was left of  the basilica of Santa Reparata. This was an incredible find for many reasons, but the biggest was that they had the earliest proof of Christians in Florence. Despite its name, you shouldn’t feel creeped out by the Crypt of Santa Reparta. You’ll hopefully be moved by how far back peoples’ devotion goes.

We hope you get a chance to see at least one part of the Duomo when you’re in Florence. We definitely wouldn’t blame you for trying to see them all!