What to See In Florence Italy

Nestled in the northeast corner of Tuscany, Florence is the capital of the region, brimming with history and artistic intrigue that attracts visitors from all over the world. The small size of the city center makes it appealing for a short trip to the city, but if you can swing it, we’d recommend settling in for a while. No matter how long you’re planning on staying, here are some recommendations for what to see in Florence, Italy. And be advised; the more you see, the more you’ll want to extend your stay. Don’t say we didn’t warn you.

Florence can be a tricky city to navigate. Book a Prontopia Local Assistant for your next trip and get where you need to go on time and stress-free! 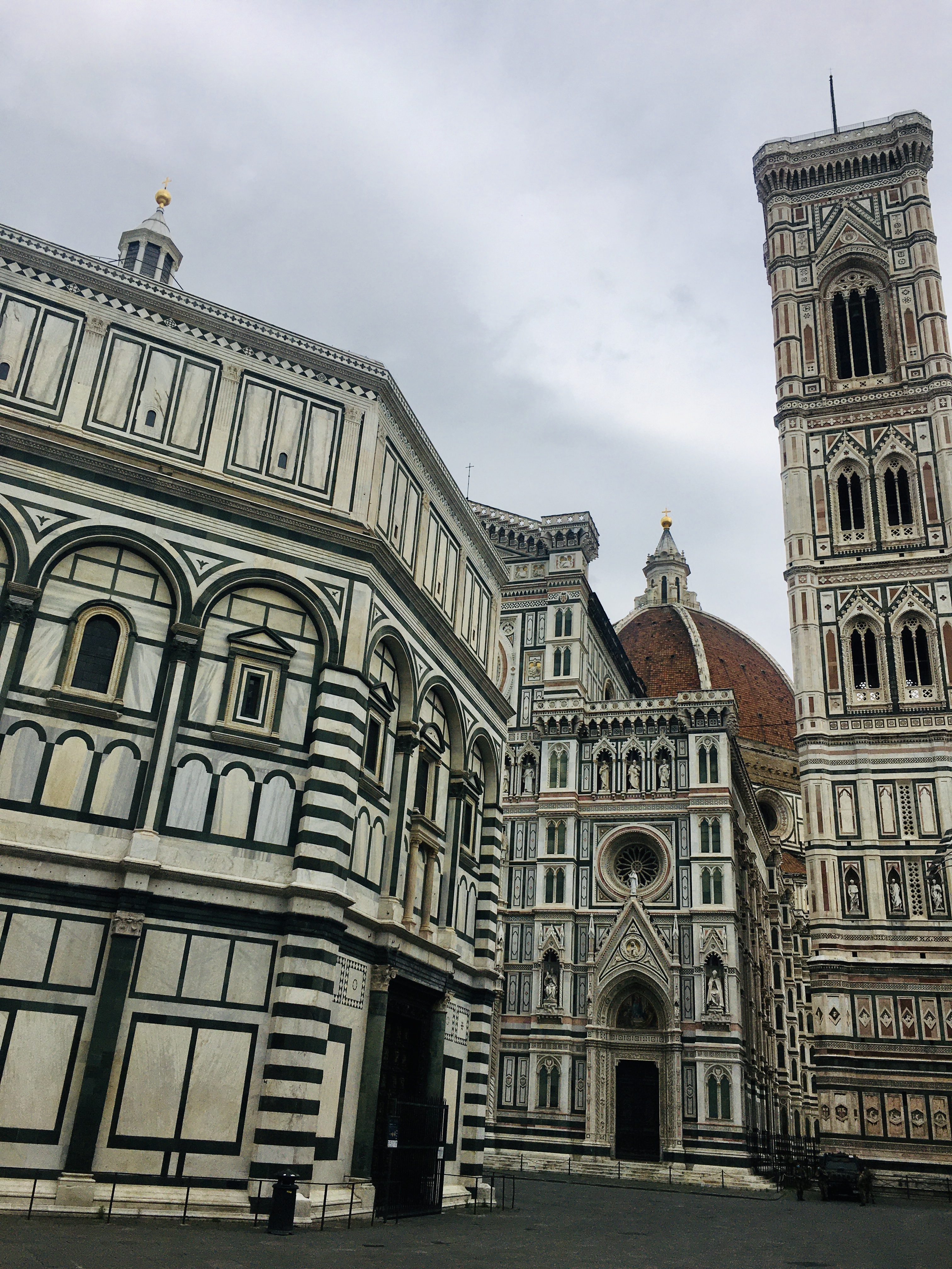 You simply can’t trek through Florence without heading to the main piazza to glimpse the grandeur of Duomo. The city’s hallmark trait, the full name of the duomo is La Catedrale di Santa Maria del Fiore and in this main piazza you’ll get an eyeful of the baptistry, cathedral, Brunelleschi’s dome, and Giotto’s bell tower as well. If you have time, buy a ticket in advance and select a slot to climb the 463 steps to the top of the dome for a breathtaking view of the city down below. Otherwise, grab a coffee at one of the cafés in the square and sip on your cappuccino while you admire the beauty before you.

Read next: The Duomo of Florence: Everything You Need To Know

Michelangelo’s marble statue of David is another symbol of the city and for good reason. When you encounter it for the first time you’ll be shocked that one man could have carved this larger than life masterpiece, which stands at 5.17 meters or about 17 feet, and done so using a single block of marble from nearby Carrara. Michelangelo decided to portray David before the battle with Goliath, while the norm was to depict him afterward. Book your tickets ahead of time to avoid long lines. 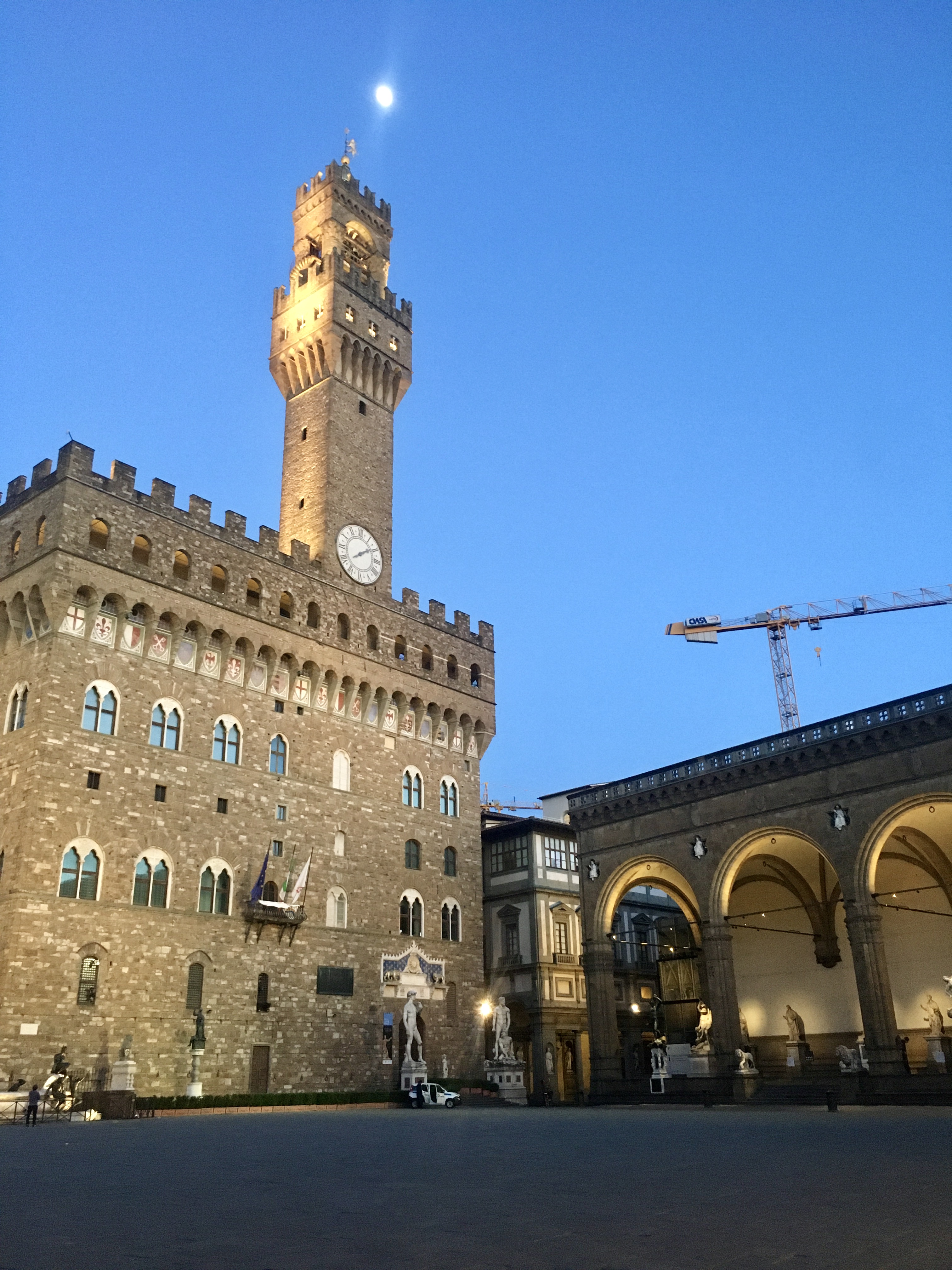 Make sure you traipse through this spectacular piazza during your visit. The tower of Palazzo Vecchio, the seat of the government and former residence of Cosimo de’ Medici, looms over the square. If you have time to visit the museum, you’ll get to stroll through the former royal apartments, ogle the Hall of Cinquecento (where Tom Hanks filmed scenes for Inferno), and climb the tower for a great view of the duomo. Otherwise, take in the outdoor museum that is the piazza itself. The loggia contains several intricate statues and a smaller copy of The David stands guard outside Palazzo Vecchio. In front of the fountain of Neptune is a small circular plaque commemorating the spot where controversial evangelist Fra Savanorola was burned at the stake. 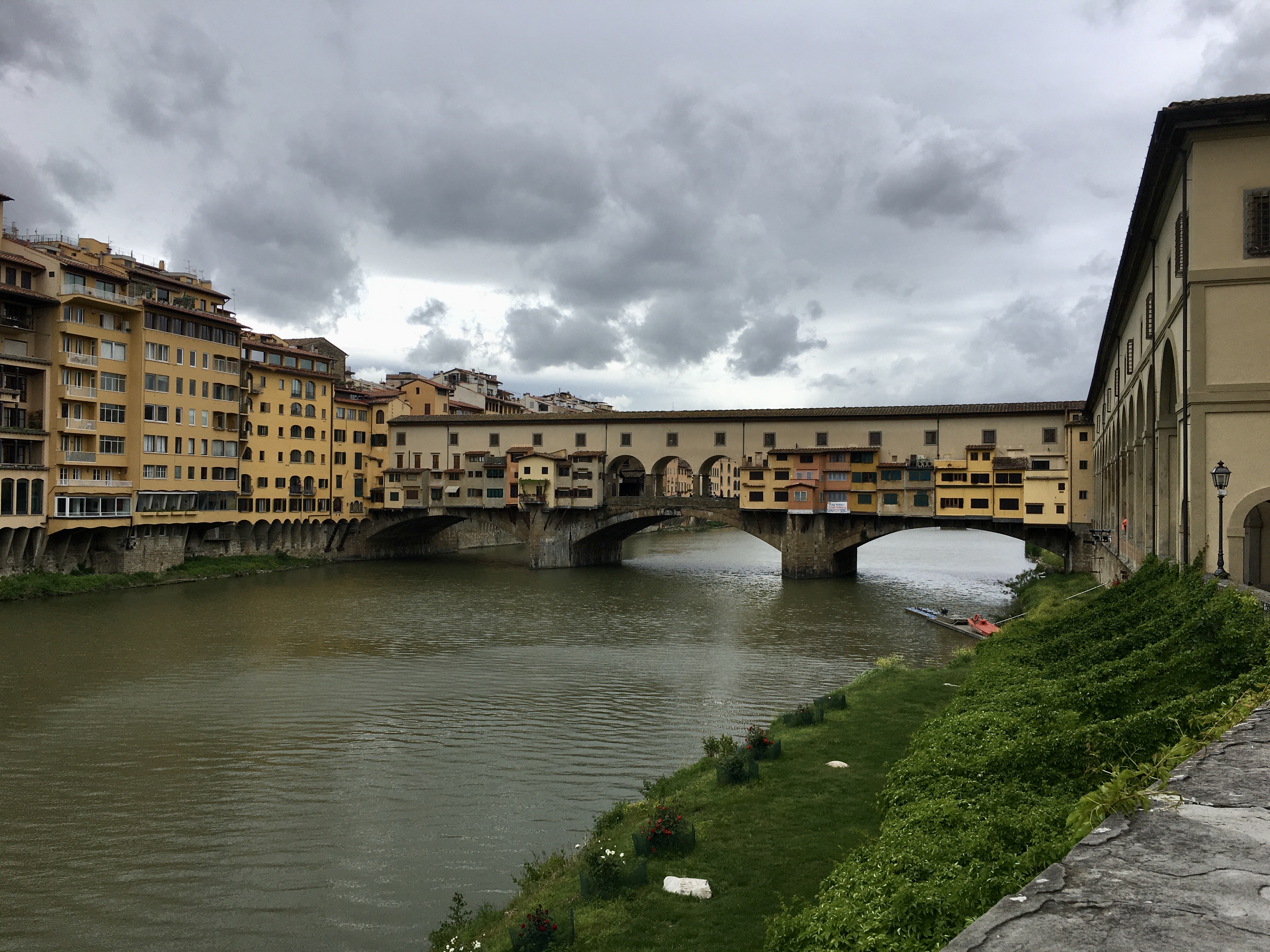 Make sure you head to the Arno and pause to admire the wonder of Ponte Vecchio, with its shops precariously hovering over the river. During World War II, all of the other bridges were bombed, but Hitler gave specific orders to spare this one. The Vasari corridor passes through the top of the bridge, connecting Palazzo Vecchio with Palazzo Pitti, so that royals and aristocrats could move about without having to step foot outside.

One of the most important museums in the world, the Uffizi is home to masterpieces from medieval times up to the 18th century, including works by Michelangelo, Caravaggio, Leonardo DaVinci, Botticelli, and many more. The size of the museum, comprising 45 exhibition halls, can be overwhelming at best, but if you pick out a few key paintings you’d like to see, you’ll be sure to leave with your artistic cravings satisfied. 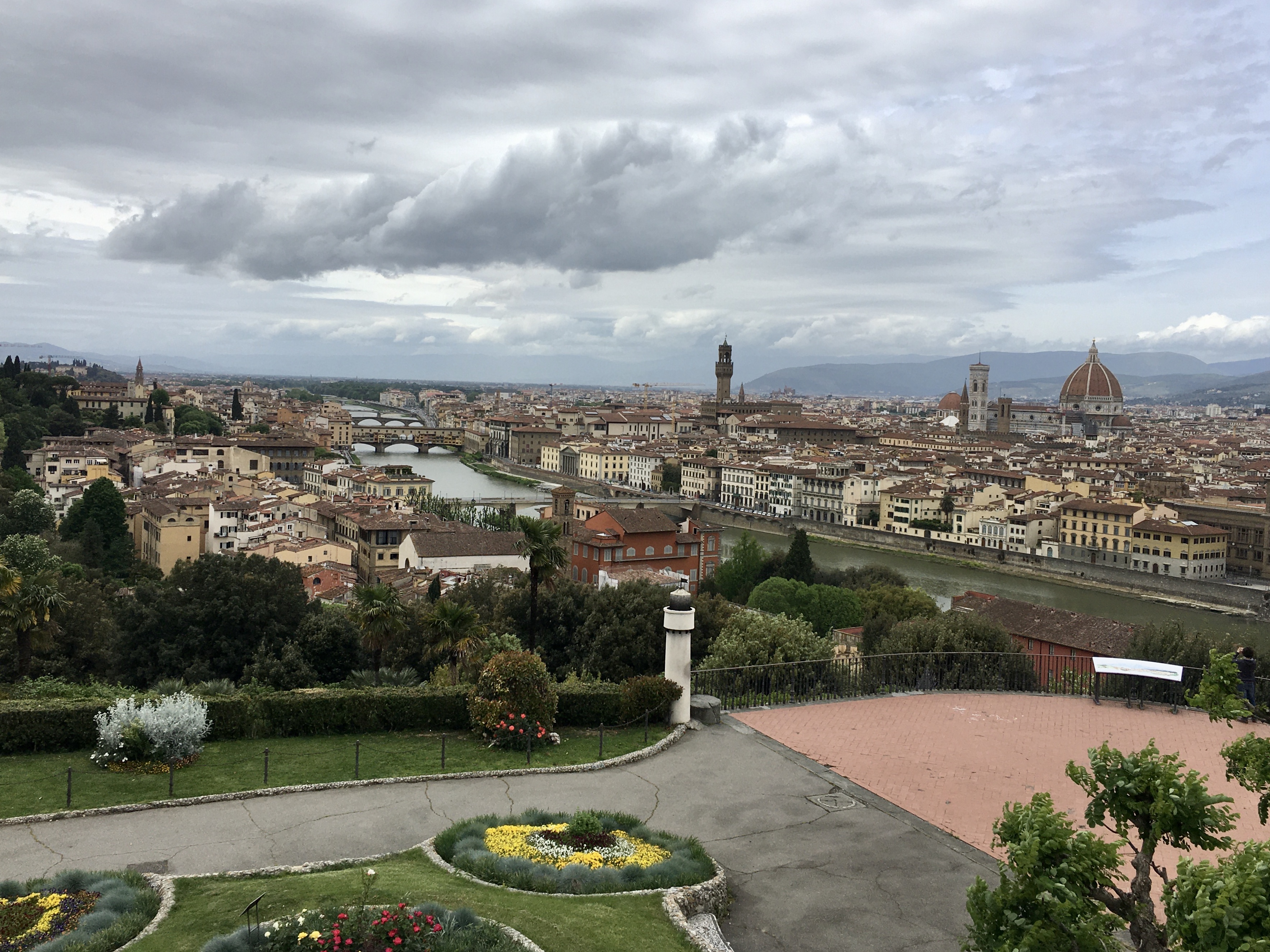 For an incredible panorama of Florence and a bird’s eye view of all the major monuments, Piazzale Michelangelo is the place to be. Whether you head up here during the day or bring a bottle of wine to enjoy on the steps during twilight hour, the payoff is priceless. Don’t be discouraged by the neverending stairs you have to climb to reach the top - you’ll be glad you made the trek. 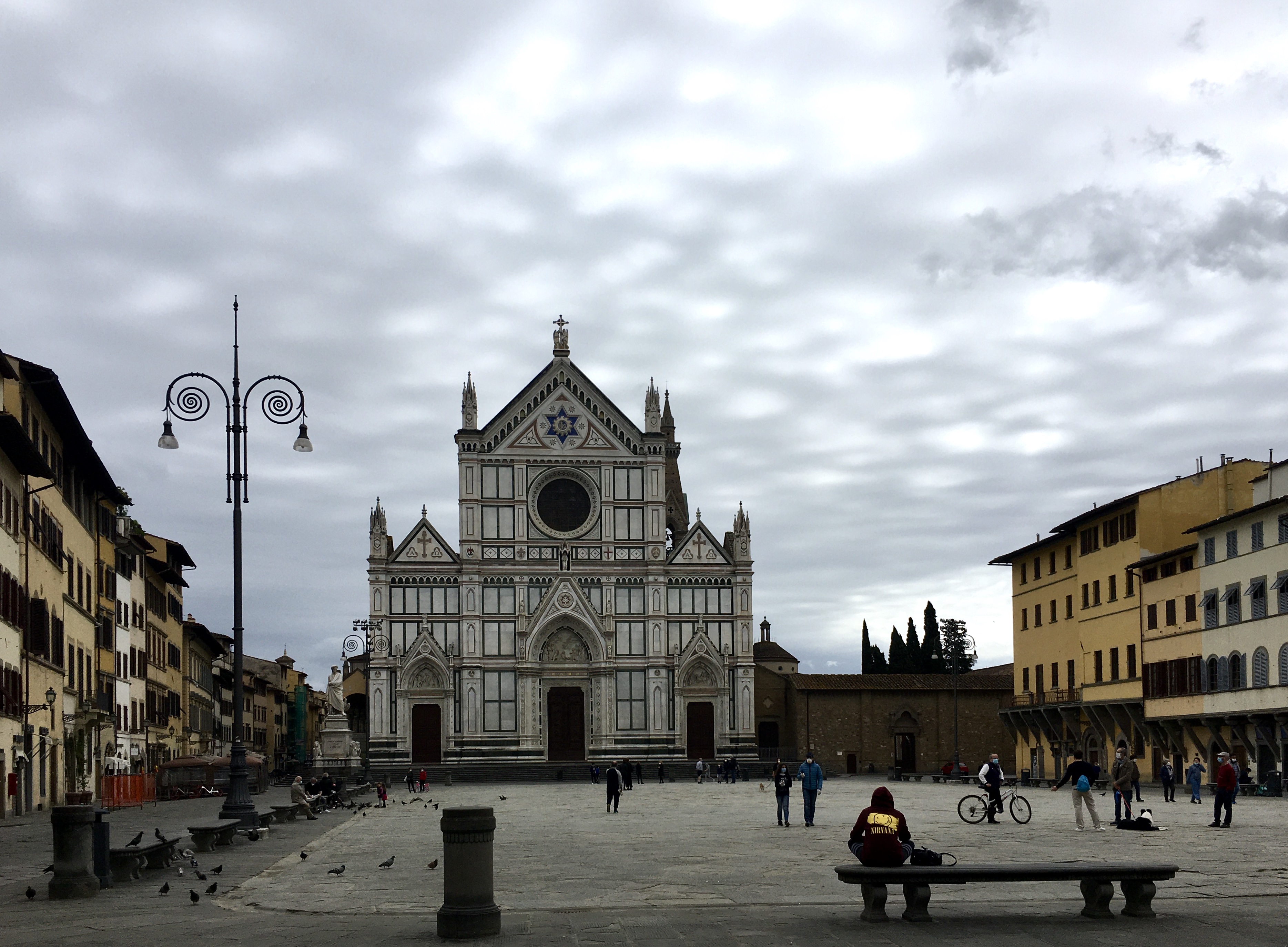 This gorgeous church sits in a charming piazza on the east side of the city. The interior and exterior are equally impressive and this is the resting place of Michelangelo Buonarotti and Galileo Galilei. The square is also a popular hub for Florentine nightlife when the sun goes down.

The central market is located in the San Lorenzo neighborhood of Florence on the north side of the city. It’s a delight to simply stroll among the stalls selling fresh produce, fish, meat, dairy, and other local foods and specialties. Head up to the top floor for a range of restaurants serving everything from pasta to pizza to sushi. If you’re traveling with others who all want to eat something different, this is a great choice for lunch. 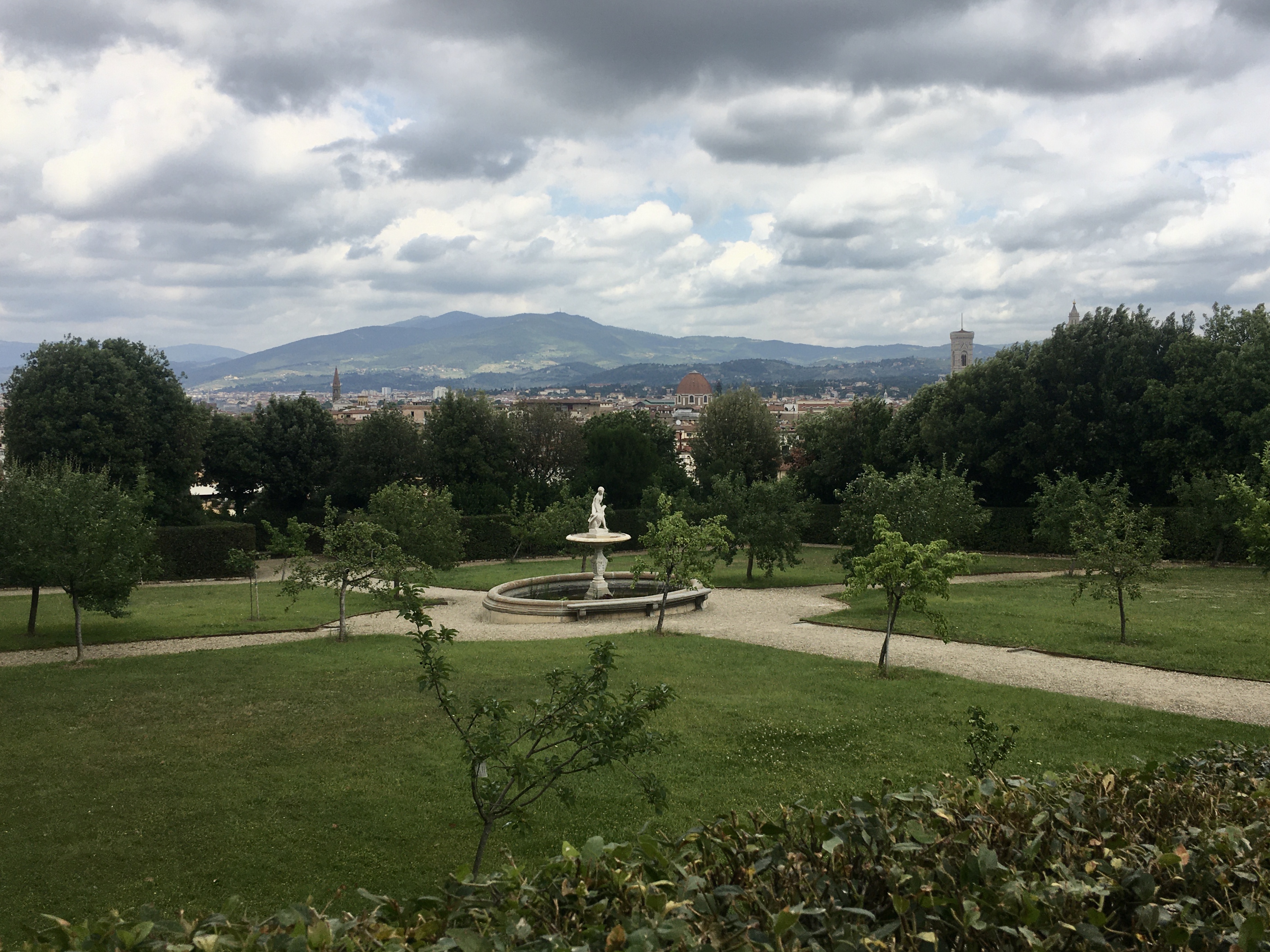 The massive building in the Oltrarno neighborhood just beyond Ponte Vecchio isn’t much to look at from the outside, but don’t be fooled. The palace was home to both the Medici and Savoy families and even Napoleon did a brief stint there (his former bathroom is intact and on display). Explore the Galleria Palatina (royal apartments) for lavishly adorned rooms covered with paintings and frescoes galore. Otherwise head up to the top floor for some modern art by Italian artists such as Telemaco Signorini and Silvestro Lega in the Galleria d’Arte Moderna. Perhaps the most famous area of Palazzo Pitti is the outdoor part. Behind the palace are the Boboli Gardens, sprawling over 111 acres (45 hectares). Stroll along winding paths between trimmed hedges and cypress trees that lead to grottos, fountains, and cultivated gardens.

Read next: The Parks of Florence

If you want to have a coffee, spritz, or even leisurely lunch with a side of people watching, Santo Spirito is the piazza for you. Situated on the left bank of the Arno, this popular piazza hosts morning markets selling vegetables, vintage clothing, pottery, and books, and it turns into a rowdy gathering place at nightfall, making it a sort of social watering hole.

It’s clear that Florence, Italy, has much to offer in terms of both art, history, architecture, and culture. Regardless of the length of your stay, the city is sure to enchant you in a way that brings you back for more. Schedule a Prontopia local assistant to help you during your next trip!