What to Eat in Barcelona Spain

If you're coming from North America, we're sure you're aware of the melting pot effect of international cuisine - think Tex Mex and Asian fusion. With so many international influences, why wouldn't we mix them all to create culinary traditions all their own? But when it comes to traveling, cuisine is a whole different story. In many countries, Spain included, food is highly localized, meaning that the dishes you find in a town are unique to those town's specialty ingredients. So, what should you look for if you're looking for genuinely authentic food in Barcelona? Here's are guide for what to eat in Barcelona Spain.

What is NOT Authentic Food in Barcelona?

A good place to start might be to cover what to avoid if you're looking for authentic food in Barcelona! There are plenty of restaurants that cater specifically to tourists, offering menu items that either feel familiar to tourists or seem authentic - often at a higher price.

Spanish food in general is characterized by its simplicity, but this is also what makes it such wonderful food. Barcelona is in the Catalonia region, which boasts some of the best cuisine in Spain influenced heavily influenced by the amazing seafood provided by the Mediterranean coast. And don't forget the rolling hills and mountains nearby, perfect for growing vegetables and raising animals. There's more to Barcelona's cuisine than meet the eye - think less paella and chorizo, and more butifarra and fideuas (more on that later).

When you're looking for authentic restaurants, follow the general travel rule of thumb and wander off the beaten path and away from clearly touristy areas (with souvenir shops and main attractions). So in Barcelona, take a step away from Las Ramblas, and keep an eye out for restaurants with typical Catalan names (hint: lots of x's or the word "can" offers a clue)

What to Eat in Barcelona Spain 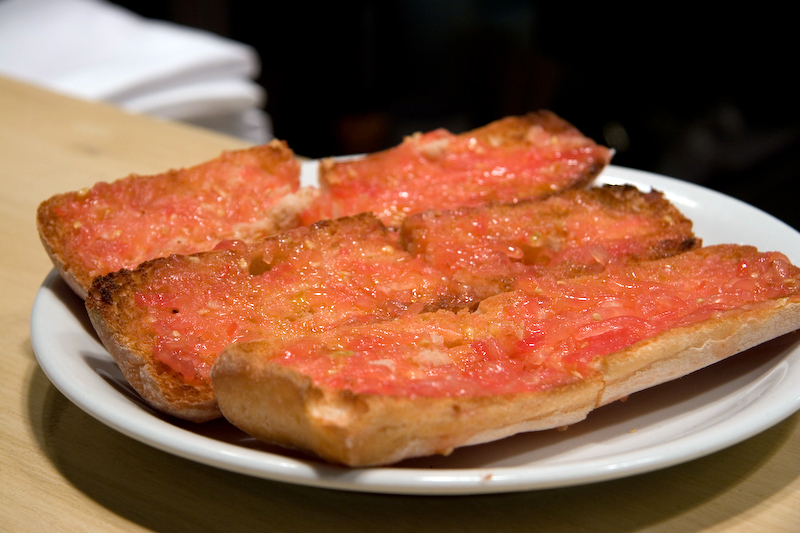 This is so simple and so delicious. Pan con tomate consists of toasted Catalan country bread smeared with garlic and lightly coated with pureed tomatoes. It's usually topped with a drizzle of olive oil and a pinch of sea salt. 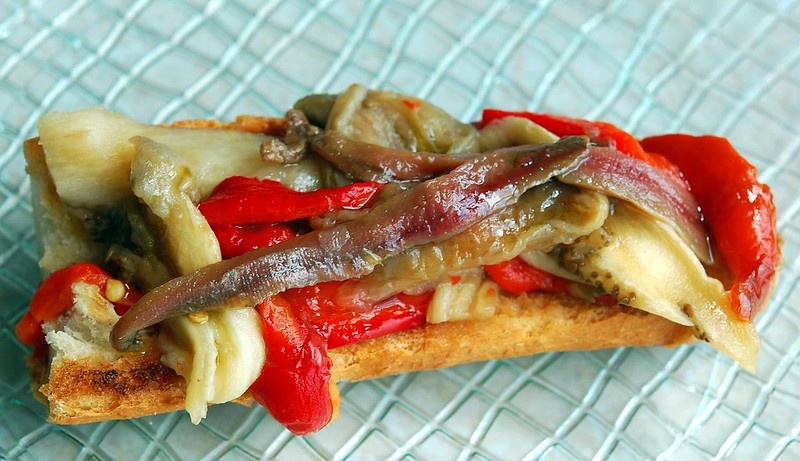 This is typical Catalan food, sometimes translated as "ember-roasted vegetables". These smokey grilled vegetables are served with olive oil and can be either a hot or cold dish. If you're a vegetarian, just be aware that sometimes anchovies can be included - just ask. 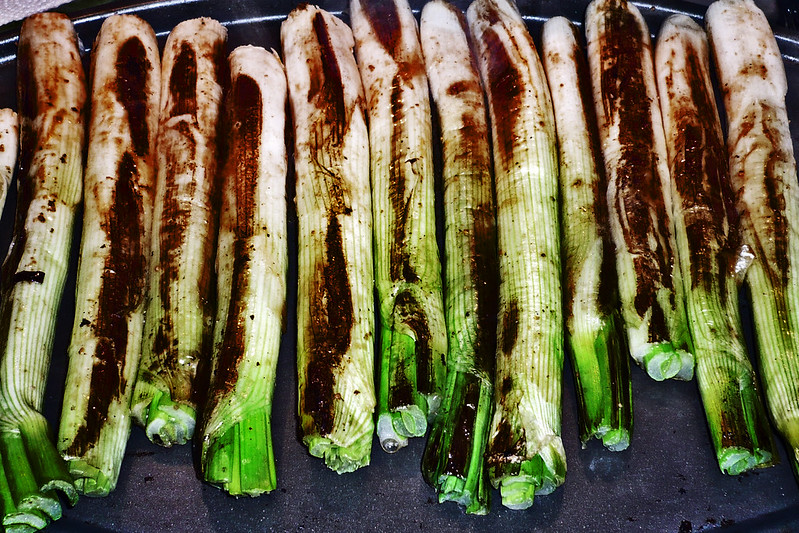 Calcots are long-stemmed green onions barbecued on an open fire. They can be really messy to eat because of the charred outer leaves, so napkins or bibs are often provided. The inside is dipped in garlic, tomato, and almond sauce.

This is a refreshing summer dish, sometimes referred to as the Catalan ceviche. This dish is based on cod, a very common ingredient in Catalonia. It's made with shredded salted cod, chopped tomatoes, red peppers, onions, black olives, and olive oil. You will also find it topped with a delicious nutty sauce call romesco. This is also a wonderful gluten-free food in Barcelona. 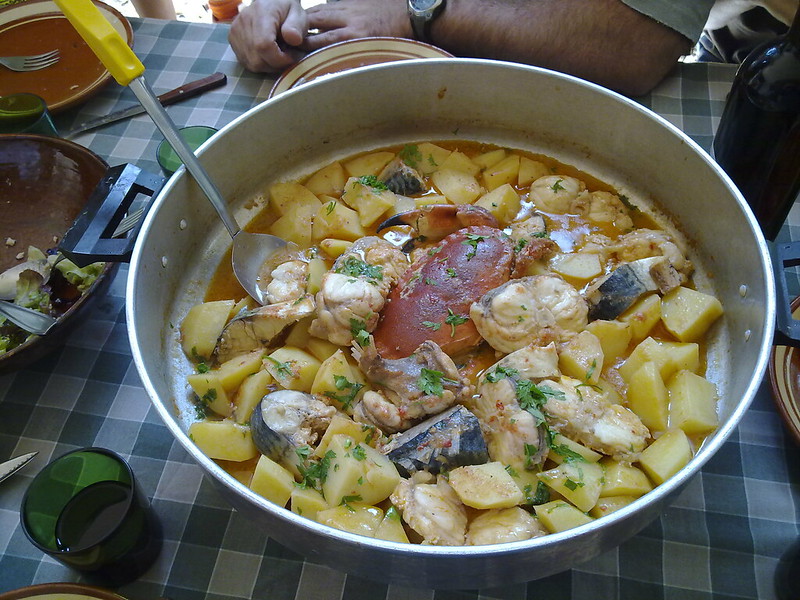 As you know, seafood is one of the biggest influences of food in Barcelona. This is a potato-based seafood stew that can be cooked with a variety of fish, cooked with garlic and olive oil. 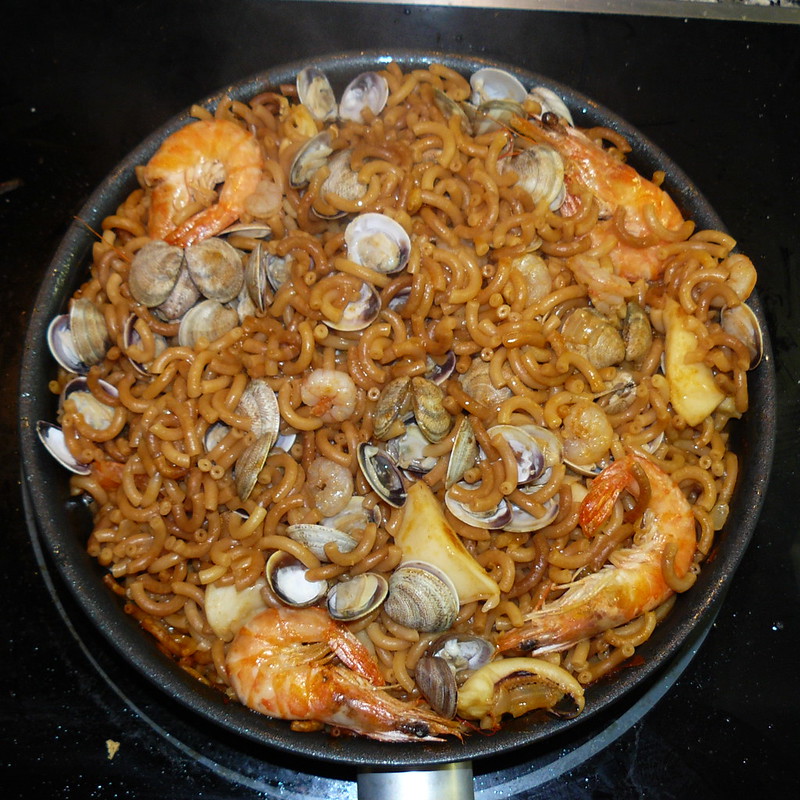 Fideua is very similar to paella, and is actually preferred by locals. It's originally from the Valencia region. This dish is made with noodles instead of rice, and features monkfish, squid, and prawns along with fish and shellfish stock.

This is salted cod, accompanied by a sauce made with vegetables, onions, garlic, and tomatoes. It tastes fairly similar to the French ratatouille.

Have you ever eaten squid ink? Now, you have the opportunity! Using squid ink as a flavorful addition to a dish is a common practice in Spain. This dish is cooked in a large skillet, like paella, and the rice is colored black like ink. 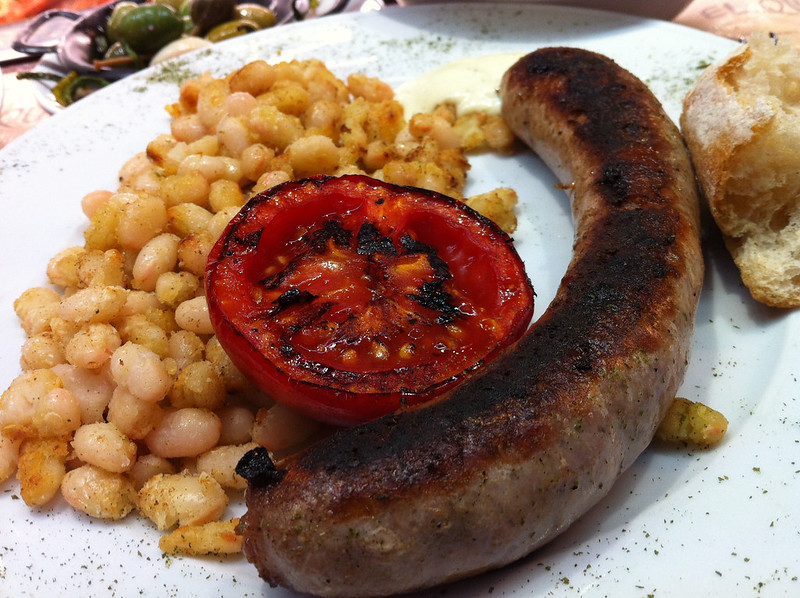 This dish is much like bangers and mash in England, but instead of potatoes, Spaniards use haricot beans served with sausage.

This is a perfect comforting dish for the colder days of winter, and you'll most likely find it being served between October and May. Escudella d'Olla is a hearty stew made with meat broth and varying ingredients, like vegetables, pasta, and lots of meat.

A beautiful mix of sweet and savory, this is a dish made with pieces of duck cooked slowly and served with pears. This dish is served on special occasions. 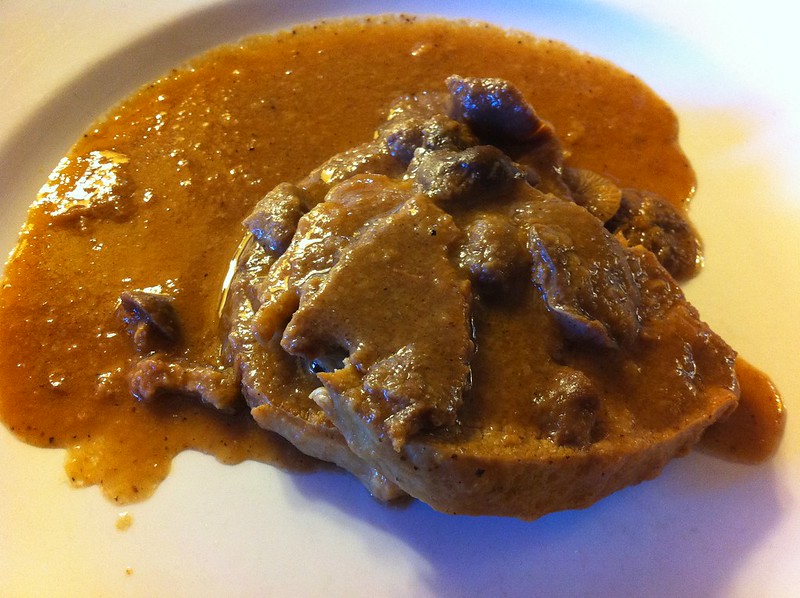 This dish is created with slices of veal cooked in a rich sauce with mushrooms. 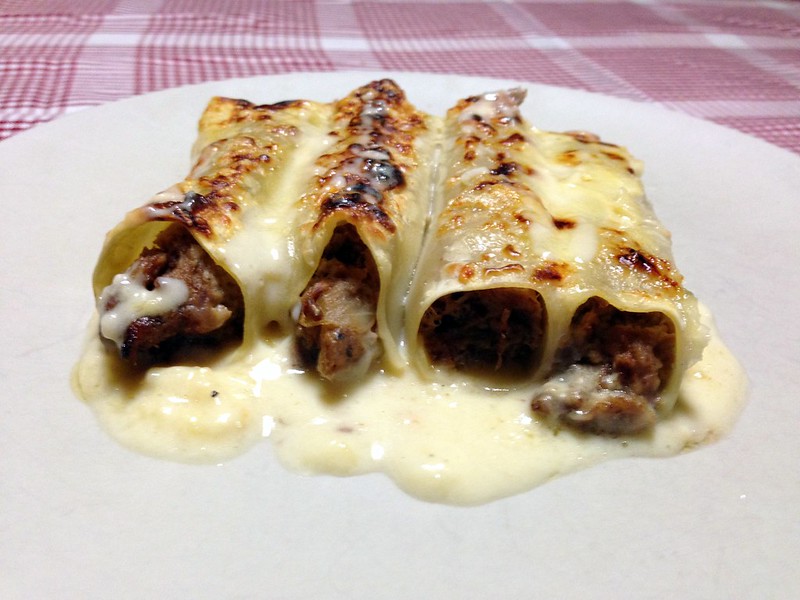 Canelons is considered to be a typical dish in Barcelona. The dish sort of resembles enchiladas, with stewed meat wrapped in either fresh pasta or cannelloni wrappers and topped with a sauce. Traditionally, these are prepared with Christmas leftovers.

This meatballs with cuttlefish in a rich gravy sauce. In Spain, its very common to combine meat and seafood. 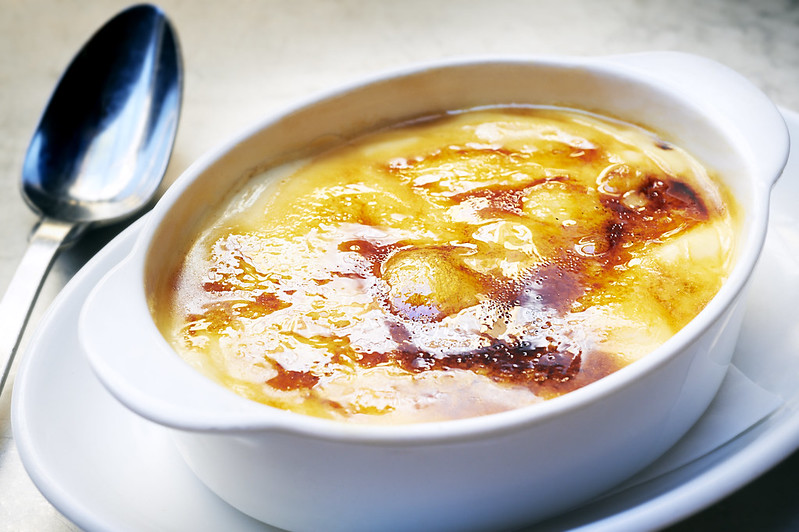 Can you go wrong! This dessert is a custard dish that's similar to creme brulee. However, instead of the strong vanilla flavor found in French custard, crema catalana resonates with notes of citrus and cinnamon. 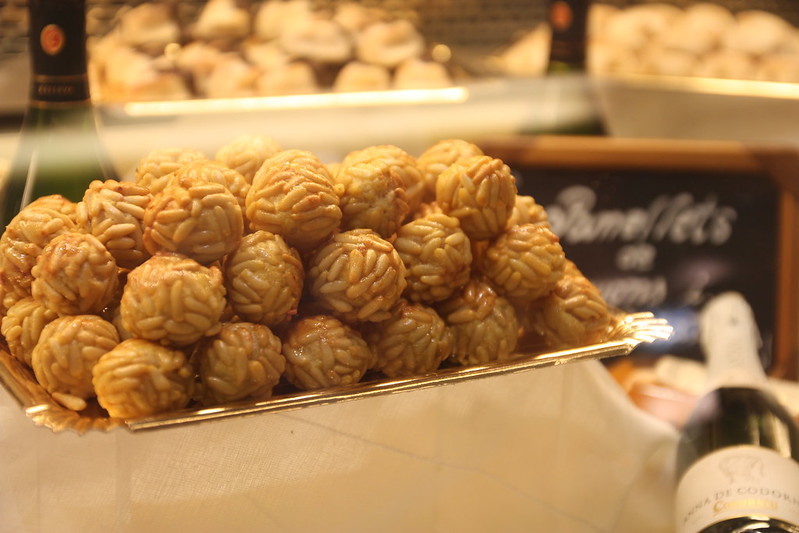 These sweet little pastries are made with almonds, eggs, sugar, and pine nuts. They can be rolled in lots of different coatings, so see if you can try the different varieties! 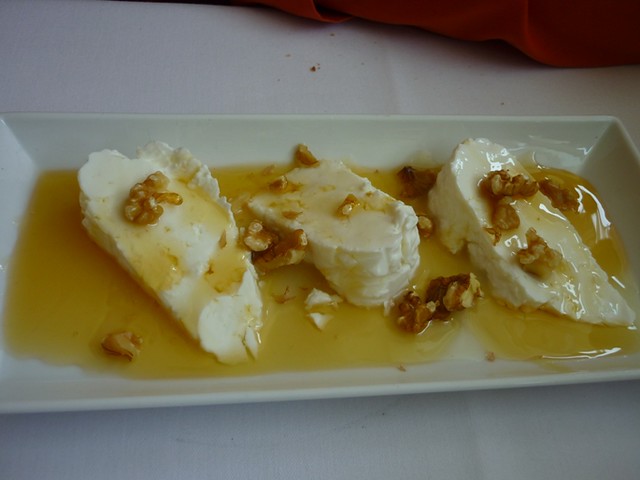 Mel i mato is a creamy mix of sweet and savory that everyone will enjoy. It's fresh, unsalted Mato cheese topped with honey and walnuts.