What Is A Gondola? Curious Facts About The Most Famous Boat Of Venice

What is a gondola? Why are gondolas black? And why are gondoliers dressed like that? Curious facts about the most famous boat of Venice.

Venice can be a challenging city to navigate. Get where you need to go stress-free - schedule a Prontopia local assistant to help you during your next trip!

We collected the most relevant and curious facts about the gondola, and about the job of gondoliers. Share this article with your travel buddies!

What Is A Gondola?

It's the traditional wooden rowing boat used in the Venice lagoon for the transport of people and for various services. It can be seen in its original birthplace, Venice, and in some of the most luxurious cities attractions in Vegas and Macao.

It is made up of 280 pieces of wood from 8 different essences and takes about a year to be built, traditionally by a squero (name of the dockyards where boats are built in Venice). 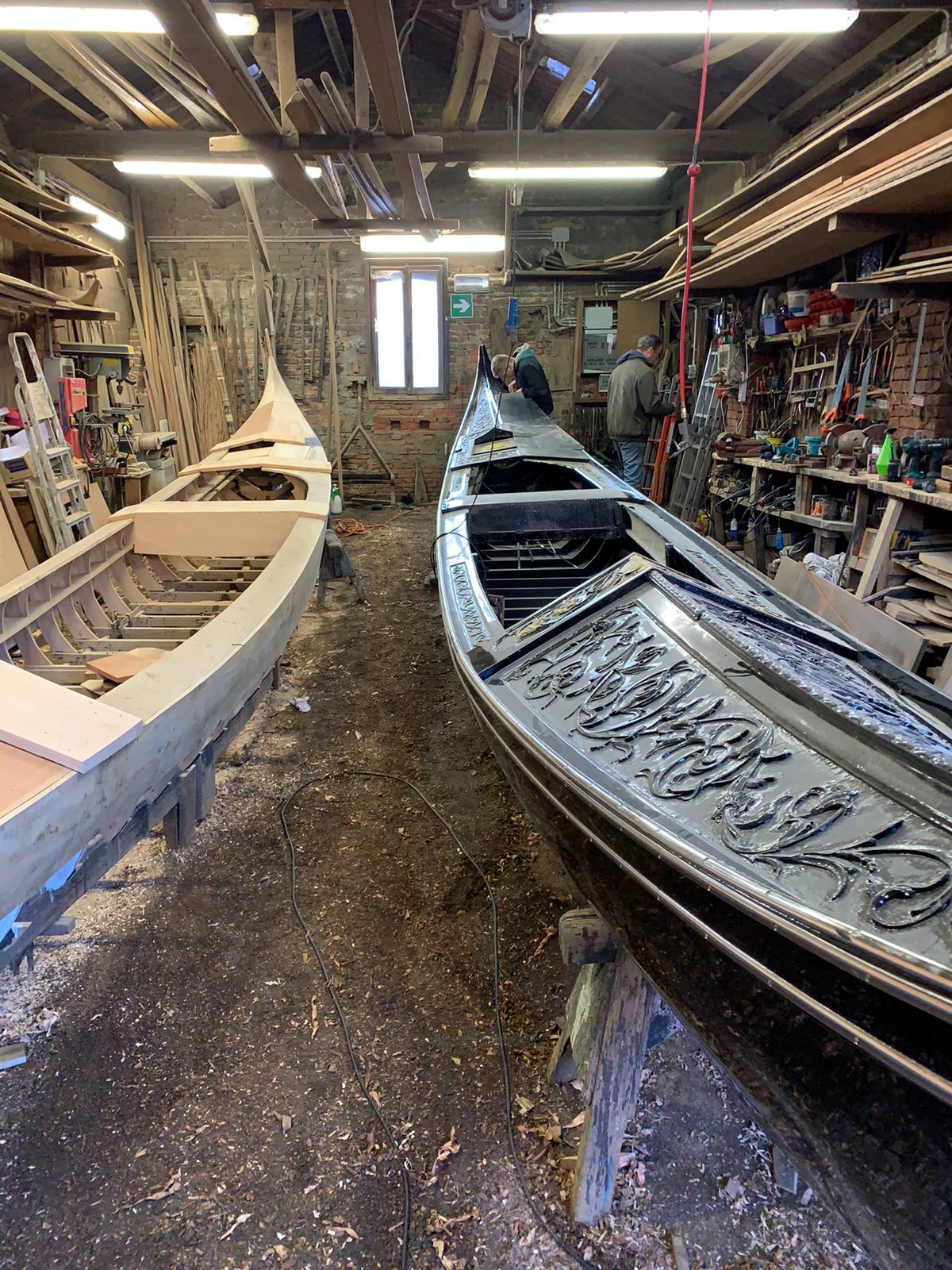 The famous gondola has a complex history and evolution.

A History Of Gondolas

The first document in which this type of boat is mentioned is in a doge Vitale Falier's document from the year 1094: "Gondulam vero nullam nobis nisi libera voluntate vestra factura estis".

In 1580 there were about 10,000 gondolas used as means of transport. Today there remain only about 500 gondolas in the lagoon for tourist services.

It took centuries to develop the modern type of gondola: in the 1500s gondolas appeared much different f

rom what we are used to. In many paintings, like the "Miracolo della Croce caduta nel canale di San Lorenzo" by Gentile Bellini inside the Accademia Gallery, we get the idea of a much unpolished shape. In fact, it was only between the 1600s and the 1700s that the physiognomy of the gondola came closer and closer to the current one. 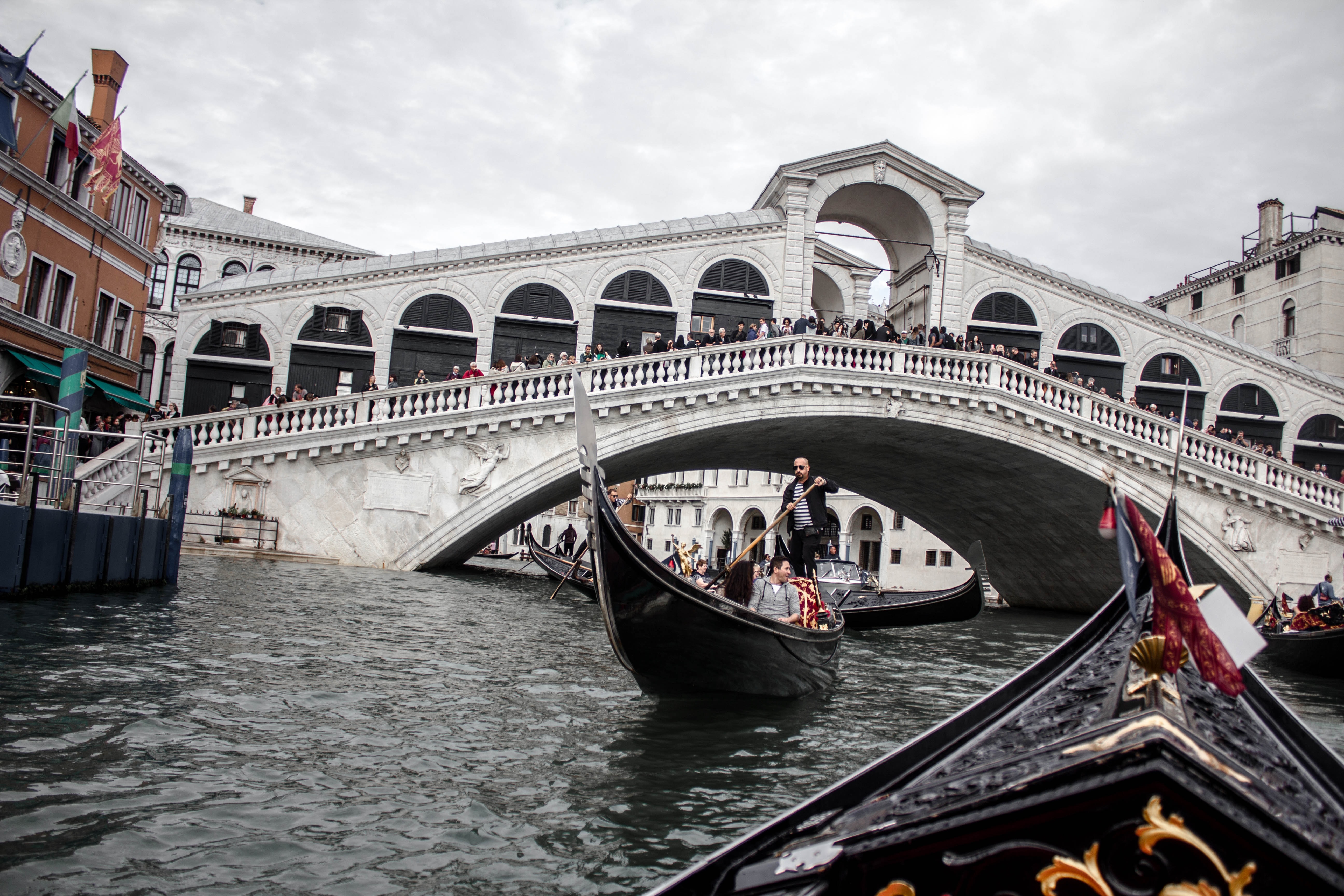 The color was also officially established by decree in the 1600s: black as the tar used for waterproofing the hull (like all Venetian and lagoon boats) as a consequence of the decrees of the Venetian Senate and Provveditori alle Pompe (from 1609) aimed at limiting the excessive glitz in the decoration of the gondolas, formerly covered with precious fabrics and gilding.

During two centuries, the stern tightened and began to rise above the surface of the water. The stern and bow decks also lost their previously flat shape to become pitched, and a small support platform was added to ensure the balance of the gondolier. The forcola also took on its characteristic elbow shape. Overall gondolas also took an increasingly stronger ornamental character. However, the hull still maintained substantial symmetry.

It was only in the nineteenth century, that for maneuverability reasons the hull assumed its typical and final asymmetry. It also at this time that the length settled permanently around 11 meters.

It's interesting to notice that currently the gondolas are open boats but, until the early twentieth century, they were usually equipped with a removable cabin called fèlze, to guarantee shelter to passengers.

The Symbols Of The Bow Iron

The famous decorated bow iron, that we can easily see in the front of the gondola, is said to be thought as a representation of Venice itself. 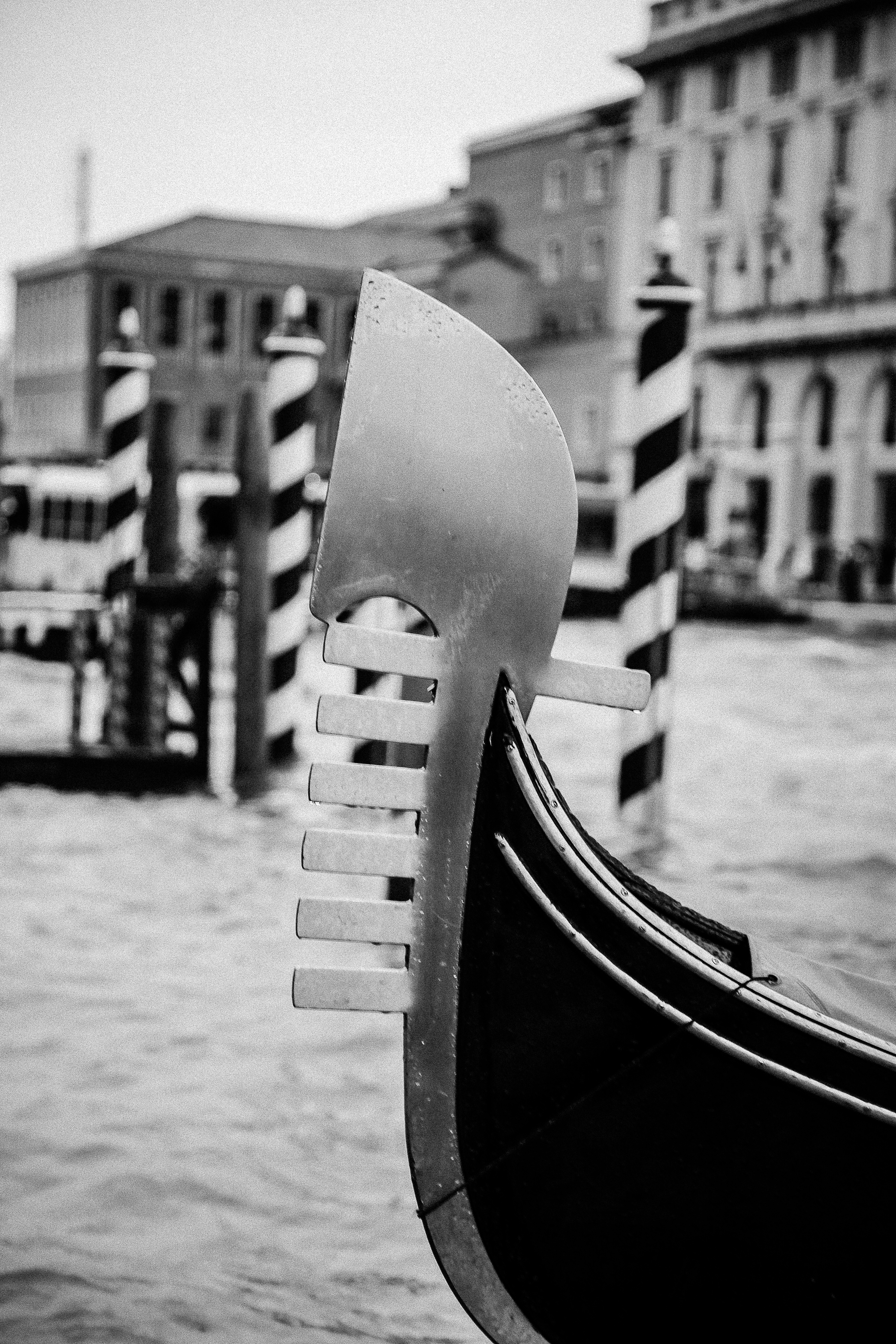 The way the iron follows the border of the gondola, almost with an 'S' shape, simulates the sinuous Grand Canal. Under the main blade, there are 6 teeth that resemble the 6 districts, or sestieri, in which Venice is divided: Cannaregio, Castello, Dorsoduro, San Marco, San Polo and Santa Croce. A sort of tooth that extends back towards the center of the gondola indicates the Giudecca. The the main blade above the highest tooth of the comb, represents the "Doge's hat" while the void beneath it symbolizes Rialto Bridge.

In more recent gondolas, there are also 3 smaller teeth, called "leaves", placed between the 6 front bars, which represent the 3 most important islands of the Venetian lagoon: Murano, Burano and Torcello. 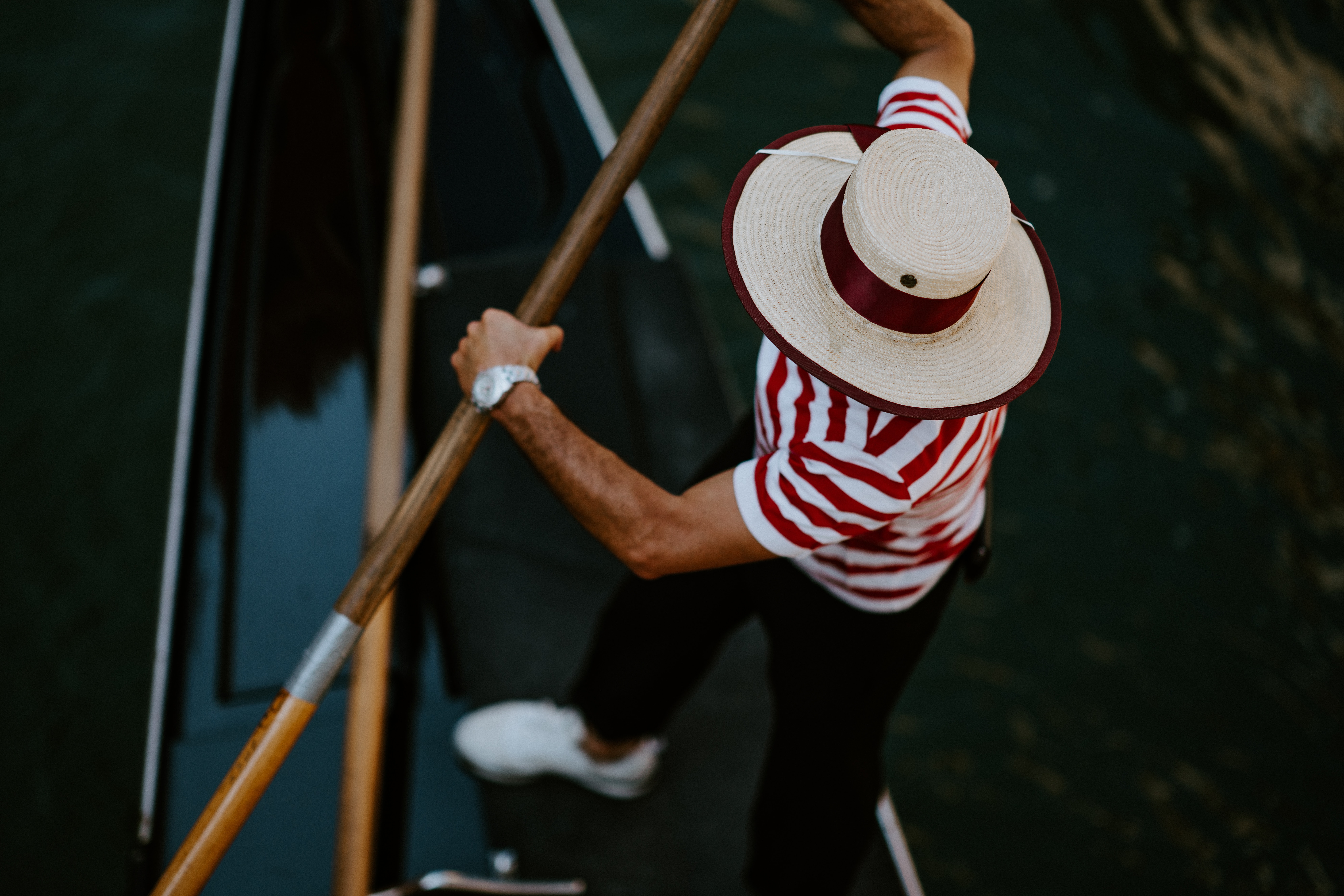 The guild had its school in the church of S. Silvestro, under the protection of S. Giovanni Battista, which was also the meeting place for discussing tariffs, future hiring, and the hub of the guild's social life.

The craft was generally passed down from father to son. Today gondoliers can also buy the license; a measure that ensures the survival of the role: no matter if a gondolier does not have male children, or his son is not willing to take his father's place, he can still find a way to keep his gondola sailing.

The image we have today of the gondolier is a modern construct established by mass tourism. Until the seventies of the twentieth century, it was a very poor category: gondoliers were seasonal workers for the upper class, which used to visit the summer house in Venice during the warmer season. Gondoliers then became these people's "coachman". During the winter, gondoliers usually carried out other jobs, such as carrying coal sacks for the fisherman. 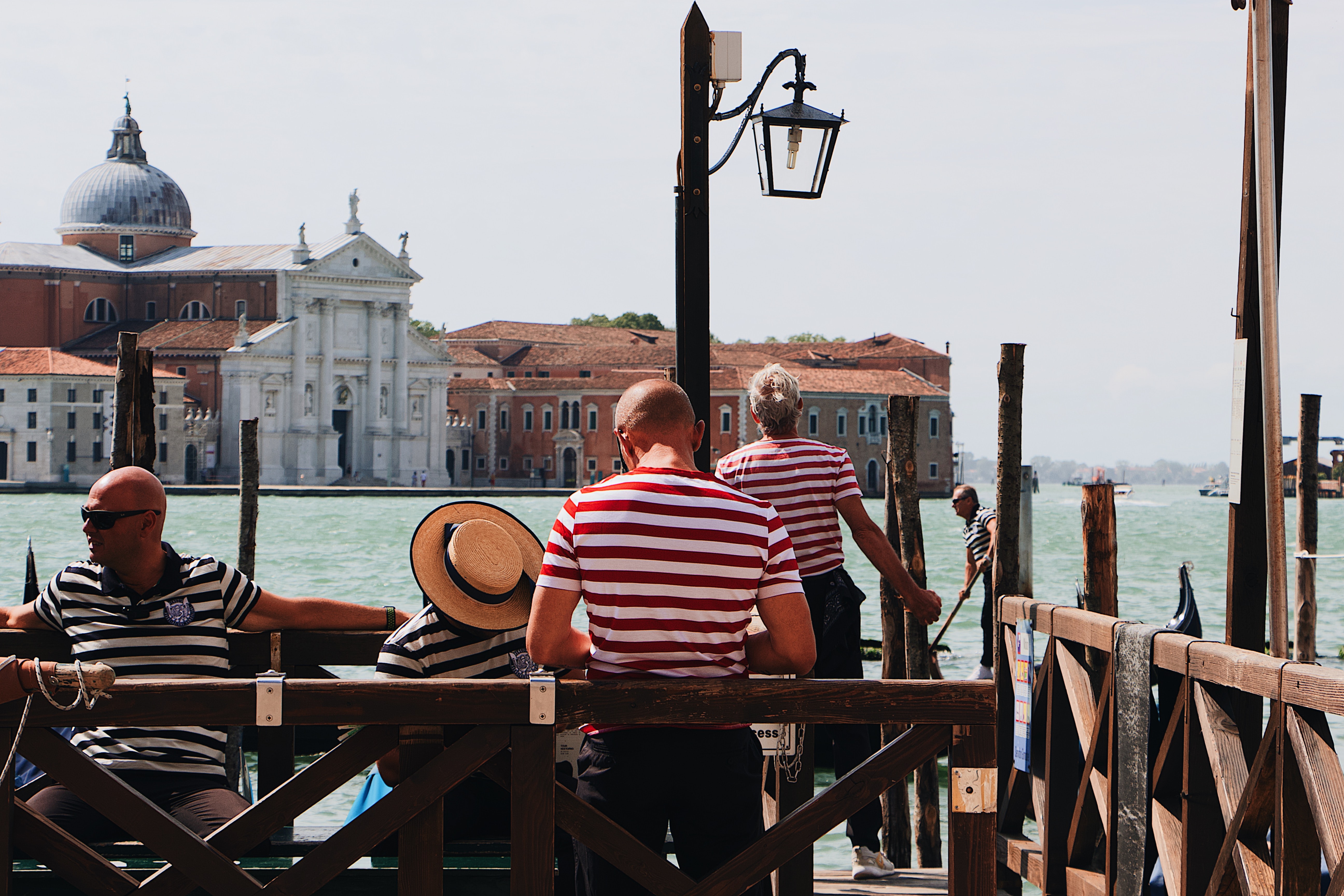 In the past, the reference for clothes was the gondoliér de casàda: sober clothing, not too refined, with an explicit reference, for example, to the small number of buttons. Nonetheless, it's true that the eighteenth-century image of the gondoliers shows clothes of a certain refinement: wide and short trousers fastened to the knee, jackets decorated with buttons and elegantly shaped, 'damask' fabrics.

Mass tourism has given a strong impulse to the category of gondoliers, directing it towards greater care in clothing. Some items of clothing gondoliers wear today are common elements of many European marineries. These elements have gradually spread and consolidated in the last decades as a tradition: straw hat, striped shirts (once white and red, then also white and blue), the marinéra, black trousers and silk waistband. 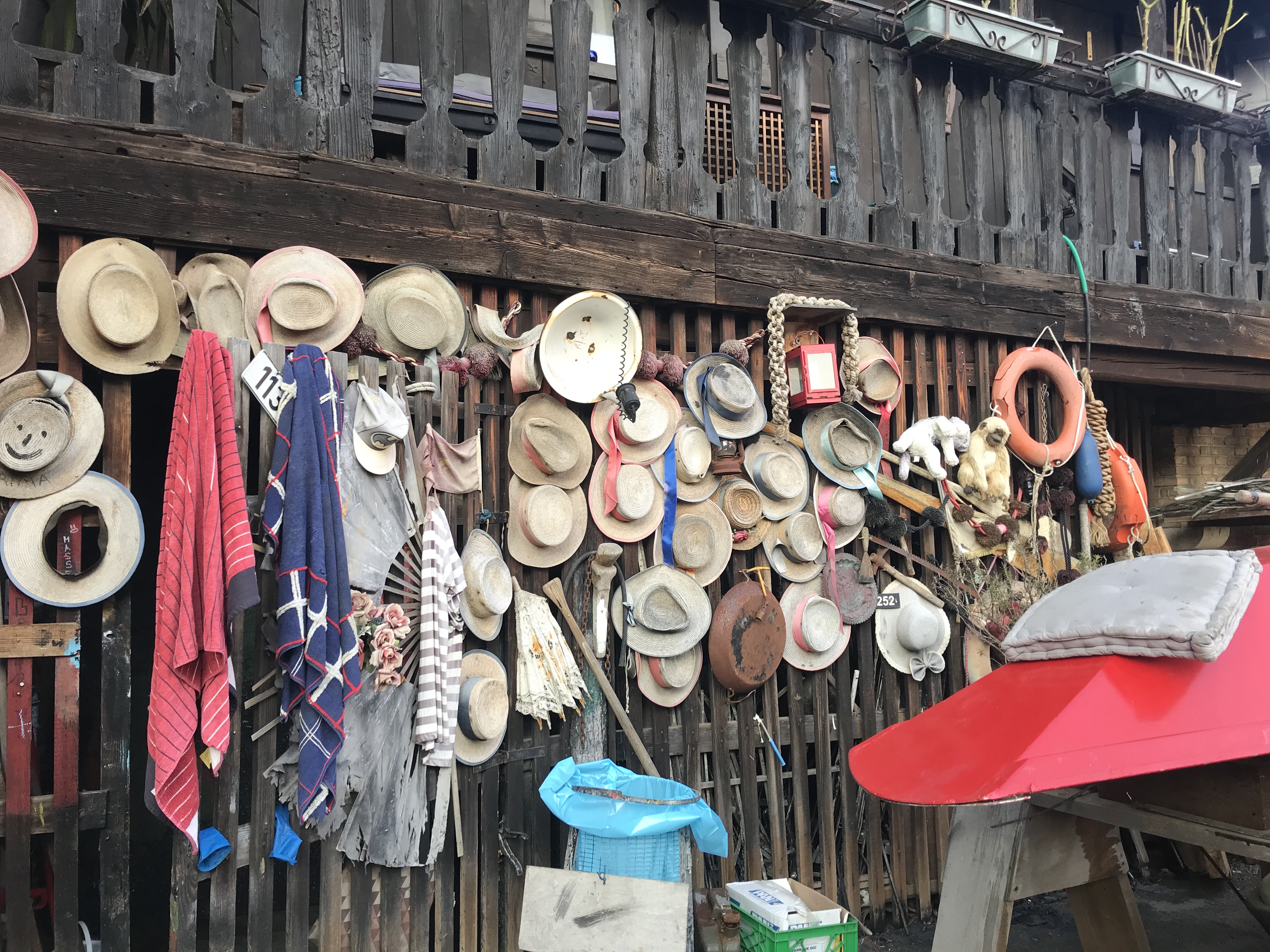 While the striped shirt is today of industrial production, the sailor tunic is often handmade and is commissioned by the gondoliers to the tailors. It is white and quite 'comfortable', short and fastened at the waist with an elastic band and closed by white laces. The two front pockets and the marinéra on the back are marked by four gold buttons. The jacket is accompanied by sober black pants comfortable for the movements of the gondolier, also provided by the tailors. The tailor-made tunic is brought out on big occasions, like the yearly regata.

Now that you know more about the story behind a gondola, discover how to rent one!

Venice can be a challenging city to navigate. Get where you need to go stress-free - schedule a Prontopia local assistant to help you during your next trip!

If you wish to read more, discover our other articles about the world of gondolas: